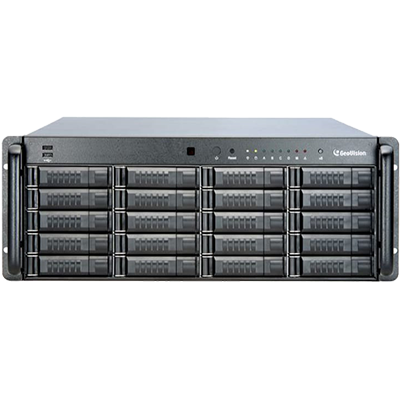 The GV-Hot Swap Recording Server System is a video streaming server supported by a powerful data storage capacity and designed for large-scale video surveillance deployments. It comes with a selection of 4U (20-bay) or 3U (16-bay) and hot-swappable SATA mobile racks. Depending on the HDD size, the GV-Hot Swap Recording Server System can store up to 200 terabytes of recorded data.

In addition, it can simultaneously distribute up to 300 channels to its clients which include GV-System (DVR/NVR system), GV-GIS (geographic information system), GV-Mobile Server, GV-Control Center (central monitoring system), Multi View (viewing software) and GV-VMS. GV-Recording Server can also send text notifications to one GV-VSM (Vital Sign Monitor) when alert conditions occur. Using the GV-Recording Server, the desired frame rates can be reached while the CPU loading and the bandwidth usage of IP video devices are significantly reduced.

In some areas or countries, you may like to install 3G wireless Internet module (e.g. GPRS/UMTS) on the GV-HD Video Encoder or GV-Compact DVR but have the problem to obtain a public IP address from ISP. The Passive connection method of GV-Recording Server can solve the public IP issue by accepting the connection request from the GV-HD Video Encoder or GV-Compact DVR, and then distribute the video streaming to clients.
The GV-Recording Server provides you with a secure and affordable remote backup solution with the GV-Backup Center, GV-Failover Server and GV-Redundant Server.
Note: